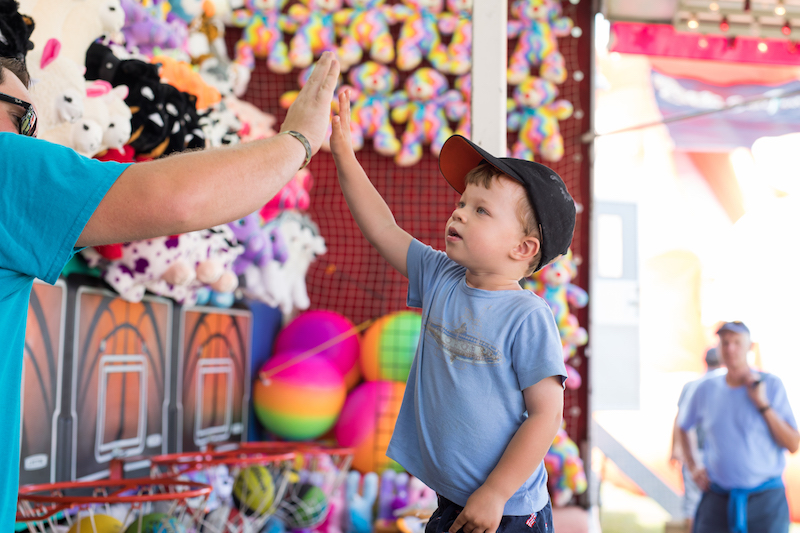 Summer peaks this weekend, with the Oak Bluffs fireworks Friday night and the Martha’s Vineyard Agricultural Fair through Sunday. Overwhelmed by all the activities? Here are our best bets, from the Complete Martha’s Vineyard Calendar.

Friday, August 16 | Light up the night

Big Mama’s Home of the Blues is the setting for Low Down Dirty Blues, a musical revue at the Martha’s Vineyard Playhouse. Performances start at 7:30 p.m., Tuesdays through Saturdays until August 28.

July 4 may belong to Edgartown, but the Oak Bluffs fireworks are literally the highlight of August. Arrive at Ocean Park early to listen to the band, then around 9 p.m. look to the night sky for a pyrotechnic extravaganza.

The 5K Run for Jabberwocky takes off at 9:15 a.m. with a half-mile Kids Fun Run at 8:45. Both start and finish at the Farm Institute in Edgartown.

At the fair, the Antique Tractor Pull begins at 10 a.m. and the 43rd annual Woodsmen’s Contest starts at 11 a.m.

Movies tonight include Fast & Furious: Hobbs & Shaw at the Capawock at 7:30 p.m. and the 1980 reggae film Babylon, released in the U.S. for the first time, at the Strand at 8 p.m. The Film Center is closed tonight.

Sunday, August 18 | Listen to the music

The Edgartown Fire Department hosts its annual Pancake Breakfast at the firehouse from 8 a.m. to 11 p.m., with fire rescue demos, games for kids, tours of the fire museum and trucks and a visit from Sparky the Fire Dog. All ages are welcome.

It’s the last day of the fair, where the Women’s Skillet Throw starts at 3 p.m. and the Holy Rock & Roll Revue appears in the music tent at 4:30 p.m.

From 4 p.m. to 6 p.m., Featherstone Center for the Arts in Oak Bluffs hosts its annual Potters Bowl, where you can buy a handmade pottery bowl and enjoy a fresh meal of soup, bread and dessert, all to benefit the year-round community art center.

This is the final evening of the annual Built on Stilts Dance Festival at Union Chapel in Oak Bluffs. Performances begin at 8 p.m. following a drum circle and admission is free.

At the movies, Once Upon a Time in Hollywood plays the Capawock at 7:30 p.m. and the Strand has Do the Right Thing at 8 p.m.