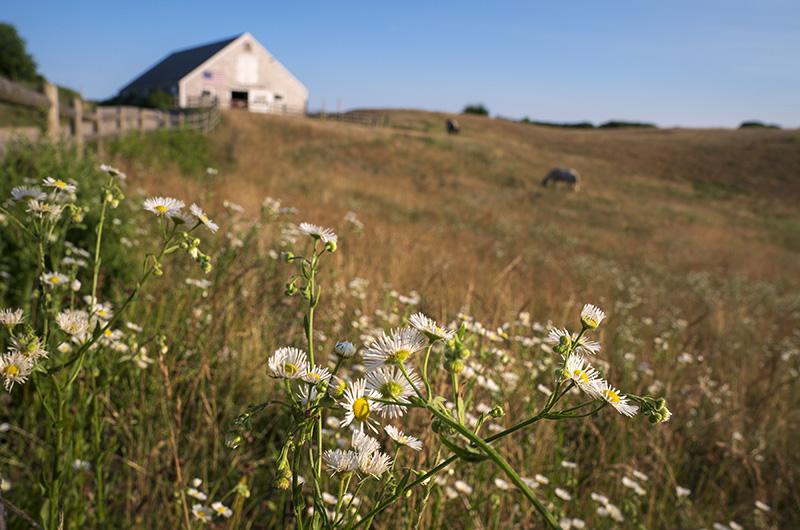 Here comes another summer weekend on the Vineyard! Sunflowers are blooming, sweet corn is ripening and the Island is at its liveliest, with arts and activities happening day and night. We’ve picked a few of the best events through Sunday—visit the Complete Martha’s Vineyard Calendar to find out what’s going on every day, all summer long.

Art shows, stage shows, live music—take your pick, they’re all happening today. The Carnegie in Edgartown is highlighting Up-Island artists in its Westerly Connections Pop-Up Art Show from 10 a.m. to 5 p.m. (also Saturday). A reception for Kate Taylor’s show of paintings at the Chilmark branch of Martha’s Vineyard Savings Bank is from 5 p.m. to 6 p.m. In Edgartown, Salte hosts an opening for Elizabeth Cecil‘s new photographs from 5 p.m. to 8 p.m. and on Circuit avenue in Oak Bluffs, the Mariposa Museum’s opening reception for its exhibit of quilts by women of color runs from 5 p.m. to 7 p.m.

Onstage, the Dock Dance Band plays in the sunset concert series at the Trinity Park Tabernacle in Oak Bluffs from 6 p.m. to 7:30 p.m., the Island Theatre Workshop’s production of the musical Once Upon a Mattress opens at 7:30 in the Performing Arts Center and Christopher Durang’s Vanya and Sonia and Masha and Spikecontinues at the Martha’s Vineyard Playhouse, where you can also see the exuberant paintings of Carol Brown Goldberg in the lobby art space.

For kids, Playful Engineers is a two-hour, STEM-focused workshop, best for ages 8 and up, at the Vineyard Haven Public Library from 3:30 p.m. to 5:30 p.m. With all the songs from the beloved Disney movie along with five new numbers written for the Broadway musical, Frozen, Jr. opens at 5:30 p.m. in the Katharine Cornell Theatre in Vineyard Haven and repeats Sunday at 10 a.m. and noon.

The whole family can enjoy a night at the ball park as the Martha’s Vineyard Sharks take on the Upper Valley Nighthawks, of White River Junction, Vt., starting at 7 p.m. at the Shark Tank in Oak Bluffs.

Love to sing? Join the Tabernacle Choir, whether for a single Sunday or all season long. Rehearsals are every Saturday from 9 a.m. to 10 a.m. at the Tabernacle in Oak Bluffs.

The Blueberry Festival, from noon to 4 p.m., is an annual tradition at the First Congregational Church of West Tisbury, where you’ll find everything blueberry: cobblers, ice cream and smoothies, along with live music, lemonade and vintage jewelry.

Touch a truck. You know you want to, and today you—well, actually, your kids, but you’re welcome to join in—have two opportunities to explore police, fire and highway vehicles hands-on: from 10 a.m. to noon at Edgartown School and from noon to 4 p.m. during Aquinnah Public Safety Day.

Greet a horse. From 10 a.m. to noon on Saturdays, Misty Meadows Equine Education Center in West Tisbury welcomes visitors for 30-minute guided tours to meet the horses and learn about what happens there.

Teens (12-18) who like comics, cartoons and drawing have their choice today of Toons & Draw, a casual weekly hangout hosted by professional cartoonist Ryan Barr from 11 a.m. to 2 p.m. at Alex’s Place at the YMCA in Oak Bluffs, and Anime Club from noon to 1 p.m. at the Oak Bluffs Public Library.

At 3 p.m., the West Tisbury Free Public Library hosts an all-ages concert and ice cream social with all-male a cappella group The Vineyard Sound. Other live music appearances today include versatile guitarist and singer John O’Toole at Town Bar and Grill in Edgartown starting at 5 p.m.

From 5 to 7 p.m., A Gallery in West Tisbury holds an opening reception for new, large-format Maine landscape paintings by Rez Williams. At the Portuguese American Club in Oak Bluffs, the Feast of the Holy Ghost begins at 5:30 with Portuguese food, music, dancing, children’s games and a live auction. In Chilmark, the Yard presents Yanira Castro | a canary torsi at 7 p.m.

Stroll through the weekly Oak Bluffs Open Market in Washington Park (10 a.m. to 2 p.m.) and then catch the Holy Ghost parade, which begins at 11 a.m. at the Oak Bluffs Steamship Authority terminal with traditional Portuguese dancers, musicians and marchers making their way to the Portuguese American Club.

Among today’s art openings are receptions for a group show with Rosenfeld, Judith Howells, Debra Gaines and Joann Frechette, at Old Sculpin Gallery in Edgartown, and for new work by Jeanne Staples at the Granary Gallery in West Tisbury, both from 5 to 7 p.m.

The Vineyard Haven Band plays at 8 p.m. on the bandstand in Owen Park. At the movies, the Capawock has Toy Story 2 at 4:30 and the Strand has Do the Right Thing at 8 p.m.