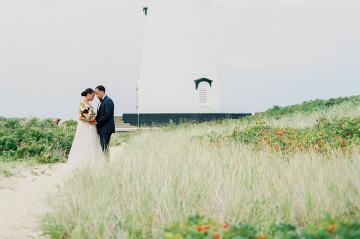 A first-of-its-kind survey in the new issue of Island Weddings magazine shows that 42 percent of weddings that took place on Martha’s Vineyard in 2018 cost more than $75,000. Of those, 2 percent cost more than $200,000.

Though not scientific, the survey confirmed that Vineyard weddings tend to be far more elaborate and expensive than elsewhere. National polls put the average price of a wedding at around $30,000.

In addition to asking about cost, the online survey asked couples who were married on the Island last year about the location of their wedding, how many people attended, and what kind of styles and venues they chose. A total of 47 percent of respondents said they held their wedding ceremony in the town of Edgartown. Chilmark was the second most popular town for both ceremonies and receptions, with 23 percent. Thirty percent of respondents said they relied on the assistance of a full-service wedding planner.

The results also reveal that weddings no longer begin and end with the ceremony and reception. Nine out of ten respondents said they held additional wedding-related events on the Island, including showers, honeymoons, sporting events, and welcome parties.

“We’ve long known that Martha’s Vineyard is an extremely popular wedding destination, but until now we haven’t been able to point to Vineyard-specific figures,” said Island Weddings editor Vanessa Czarnecki. “While the numbers are interesting in their own right, our hope is that the survey will help couples who are planning their own Martha’s Vineyard wedding make more informed choices and therefore simplify the planning process.”

The full results of the survey can be seen in the Summer-Fall 2019 of Island Weddings, available on newsstands now and at vineyardgazettestore.com. The cost is $6 plus shipping. Island Weddings is published twice yearly by Martha’s Vineyard Magazine, part of the Vineyard Gazette Media Group.