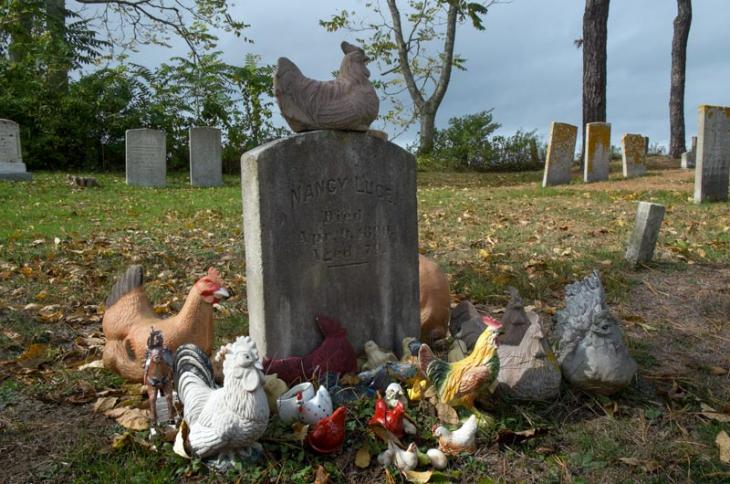 Fans from near and far leave chicken-shaped tributes at her West Tisbury grave, a marble slab adorned with a chicken of its own. “It’s one of the first places I take my guests when they come to the Island,” says Leon Brathwaite 2nd, a former chairman of the Massachusetts Commission on Discrimination who lives on the Vineyard year-round.

Nancy Luce was a tourist attraction during her lifetime as well, a hermit-like character who for more than 50 years earned what she could by selling photographs and poems about her beloved bantam hens. In ill health herself for most of her life, she cared for her chickens devotedly and when they died, mourned deeply and hoped to meet them again in Heaven.

Adding to her fame, Nancy Luce even put up headstones for her favorite birds, which still stand outside her family home on privately-owned property in West Tisbury. Her life and the quirky artworks she created have inspired generations of animal lovers, but only in recent years has Nancy Luce been getting the respect some artists believe she has always deserved.

“(E)very piece of evidence that I discover about Luce confirms my idea that she was an intelligent and resilient woman, and most certainly not a farcical hermit,” writes author Carand Burnet, who is working on a creative nonfiction book about Nancy Luce’s life and art. “Her efforts were in hopes of forging a better world where the ailing and misrepresented could be respected and have a voice realized through the unbiased caring of all living creatures.”

Nancy Luce has also inspired a new cantata by composer Thomas LaVoy (born 1990), who premiered the work with the Island Community Chorus at the Old Whaling Church on April 6 and April 7.

LaVoy had never been to Martha’s Vineyard or heard of Nancy Luce when he spotted a print of her by Vineyard artist Daniel Waters of Indian Hill Press. At first he thought the lady with the chickens was someone out of a nursery rhyme, but an Internet search revealed she was a real person—and that her poetry is deeply moving.

LaVoy immersed himself for a year, visiting the Vineyard, poring over the poems and working at the piano until he finished the 22-minute work. But it was only last week that he discovered, through the archivists at the Martha’s Vineyard Museum, that he is actually related to Nancy Luce.

Based entirely on her poems, which range from the practical to the prayerful, LaVoy’s “In Heaven, Hereafter” featured Island soprano Molly Conole as the soloist with the Island Community Chorus. Their performance sent the audience to its feet in a prolonged ovation.

“In Heaven, Hereafter” will be performed in May by a chorus in Aberdeen, Scotland, and then return to the U.S. for concerts by choruses in several states.