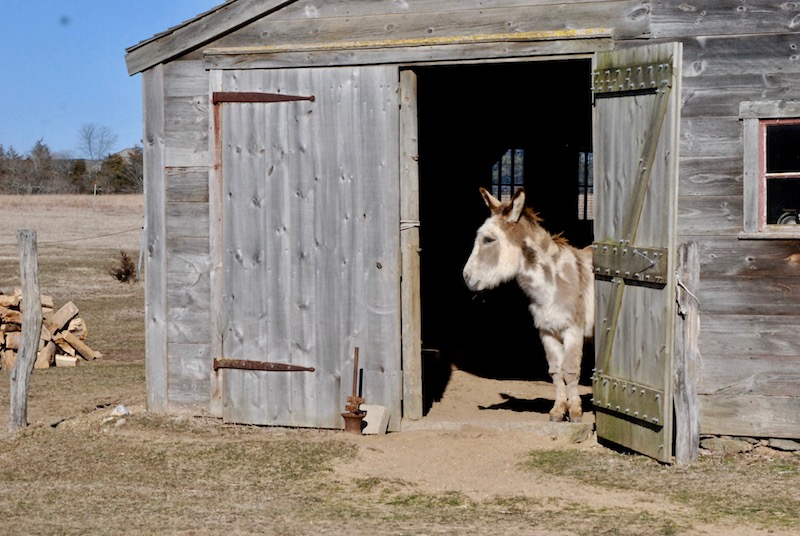 We’ve noticed on our up-Island jaunts that the critters are starting to poke their heads out of the barn. The oxen were grazing on Middle Road yesterday afternoon despite little to graze on. With the long days, hens are laying more, and eggs are plentiful. Baby chicks are arriving at the post office. On Facebook, precocious gardeners are posting photos of tiny seedlings they’ve started under grow lights or in a hoophouse.

Now we can all stare ardently at the ground in our perennial gardens, waiting for the first peony shoots to come up. Or if we’ve got asparagus beds, it will be just a few weeks before the first tips break through the soil. Crimson stalks of rhubarb will follow.

Best of all, on Tuesday the winning poster for the 158th Ag Fair was revealed, and winner Elissa Turnbull’s colorful and whimsical illustration is a joyful valentine to the summer event we can now officially anticipate.

Pick your art form — theater, music, or film. Start this afternoon with a great documentary about New York street photographer Gary Winogrand at the M.V. Film Center (4 p.m.). Winogrand used his Leica M4 to snap candid images of everyday people in 1960s and 1970s New York, yet it was only after his untimely death in 1984 that the influence and artistry of his work was celebrated. Garry Winogrand: All Things are Photographable is the first cinematic treatment of his work.

Tonight at the Playhouse, Scott Barrow directs Christopher Roberts in a special one-night only performance of White Rabbit Red Rabbit at 7 p.m. And up at PathwaysArts, David Stanwood will open a fabulous evening of piano music that will also include Paul Thurlow, Peter Halperin, and Griffin McMahon. Three Pianists and the Grand Piano begins at 7 p.m.

Tonight you can go Glow Bowling. Or do Glow Yoga. Go figure! Glow bowling begins at 9:00 p.m. at Barn, Bowl & Bistro in Oak Bluffs. Glow Yoga for Women is 6:45 p.m. at Eclipse Studio in Vineyard Haven.

Take in a reimagined Romeo and Juliet at Shakespeare for the Masses tonight at the Playhouse (7 p.m.).

In a tradition that began four years ago, the celebration of Jimmy Cliff’s birthday takes place this year at the M.V. Film Center with the American premiere of the 1980 movie Babylon, which screened at Cannes but was deemed too controversial to show in the New York Film Festival that year. “Raw and smoldering,” the story of a young reggae DJ features alluring cinematography and an unforgettable soundtrack. Join the celebration, which begins at 6:30 p.m., and enjoy Red Stripe beer and authentic Jamaican bites from Vineyard Caribbean.

If you missed Shakespeare for the Masses yesterday, it’s on again this afternoon at 2 p.m. And if you missed David Stanwood Friday night, he’s back at Pathways tonight at 7 p.m., this time with many musical friends and three pianos—one cabaret piano and two baby grands.