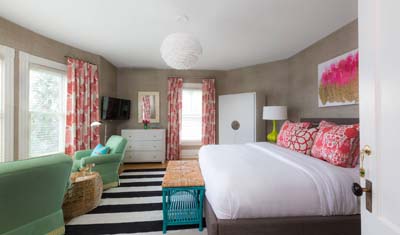 Together with The Christopher and the newly expanded Sydney, the early summer 2018 opening of The Richard makes for a trio of three, and an official collection of luxe boutique hotels in downtown Edgartown by Lark Hotels! Whether you’re looking for a regal retreat or a cool coastal vibe, Lark has an Edgartown inn for every discerning Island visitor.

The Richard: A Royal Escape

The Sydney: Jewel of the Island

Relax and unwind in the laid back style at The Christopher (24 South Water Street), a fully renovated 15-room boutique Edgartown hotel with a calming St. Barths vibe. The fire pit and lounge seating in the serene and secluded courtyard call for intimate gatherings on cool spring, summer, and fall nights.

A King Deluxe room at The Christopher

The Christopher and The Sydney’s original Captain’s House rooms open for the season on May 2, 2018. The 14 new annex rooms at The Sydney (the only newly built hotel rooms in Edgartown) and the newly renovated Richard will follow with a grand opening in early July.

These three boutique Edgartown inns join sister Oak Bluffs hotel, Summercamp  (formerly The Wesley), renovated and opened by Lark Hotels in 2016. With 96 rooms on the water front, Summercamp’s fresh, fun renovations invite guests to relive the glorious days of childhood summers — while also enjoying distinctly adult amenities. Gaze at the harbor from your deck chair, grab a snack from the Camp Canteen, or play ping pong or Twister in the game room. To learn more, visit: www.summercamphotel.com.