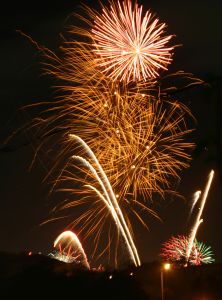 In the blink of an eye the last week of August is now the Week Ahead! Starting out with a bang at the traditional fireworks display in Oak Bluffs, the week continues with the three remaining days of the Agricultural Fair, music, a musical, traditional community sing and a free concert on the Lawn of the Edgatown Library. Enjoy the Week Ahead!

Friday, August 21
Fireworks at Ocean Park by the Sea
Traditional end of season fireworks display over Nantucket Sound.  Viewers gather in Ocean Park to ooooo and aaaahhh and picnic with friends & family.

Saturday, August 22
Billie Holiday At 100
Third annual event, a tribute to the legendary Billie Holiday for the 100th anniversary of her birth. Michael Mwenzo and The All Stars featuring the incredible voice of Brianna Thomas.

Sunday, August 23
Broadway Musical Hit: The King and I
Island Theatre Workshop presents Rodgers & Hammerstein’s classic, The King and I. Based on “Anna and the King of Siam”

Tuesday, August 25
Sounds Like Summer: Free Concert Series
Sabrina and the Groovers perform their special blend of pop and rhythm n’ blues to close this season of free concerts on the Edgartown Library lawn. Bring a blanket or chair.

Wednesday, August 26
Community Sing
Come join 500 of your island friends and neighbors to sing fun songs, both new and old. You’re sure to have a great time!