To the Cinema: MV International Film Fest All Weekend 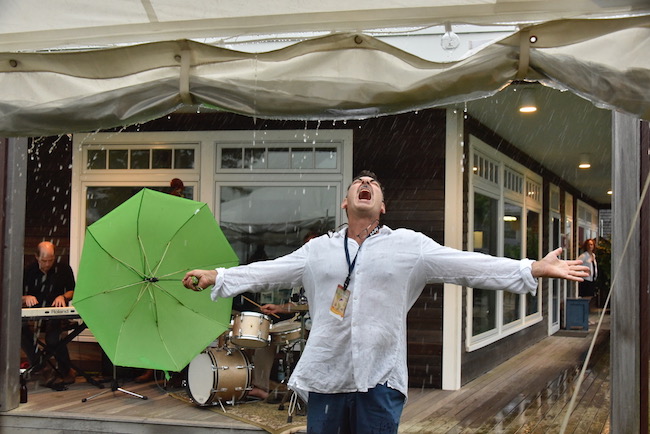 To the Cinema: MV International Film Fest All Weekend

Film fans, this is your weekend on the Vineyard. The 13th annual Martha’s Vineyard International Film Festival had its official kickoff party last night (though films began rolling on Tuesday) and the line-ups for this weekend at Island theaters are stellar. Films show at both the Martha’s Vineyard Film Center in Tisbury Marketplace in Vineyard Haven and at the Capawock theater on Main Street in Vineyard Haven.

In total, the event is a six-day long celebration of feature-length and short films that offer a diversity of cultural perspectives, according to the Vineyard Gazette.  Executive director Richard Paradise (pictured above at last night’s party at Tisbury marketplace) says, “My whole point of doing the festival is to give our audiences a non-American perspective, to give them a look at the world through the eyes of film, the filmmaker’s storytelling, and a view of what goes on in other parts of the world.”

Friday, Saturday and Sunday’s offerings (see a schedule of all films here) are particularly robust.

Friday’s schedule culminates with a screening of  The Charmer at the film center at 9 p.m. The film is an intense drama about a young Iranian desperate to meet a woman who can provide a “paper marriage” so he can stay in Denmark. Then he falls in love—just as his past catches up with him. The Charmer won top prizes at international film festivals in Taipei, Palm Springs, Warsaw, Tbilisi, and Chicago.

The Animation Shorts Showcase happens on Saturday at the film center at 4 p.m. The main event Saturday night is a screening of 11 short films beginning at 6:30 p.m. at the Capawock. From over 300+ entries, the festival selection committee has chosen 11 finalists. Saturday viewers will screen each short film and the jury will select the “Best Overall” film at the conclusion of the program. The winning film will be shown again prior to the closing night film.

A highlight of Sunday is the film Tea With the Dames (noon at the Capawock), a unique celebration of the lives and careers of four of our most iconic actresses: Dame Eileen Atkins, Dame Judi Dench, Dame Joan Plowright and Dame Maggie Smith.

Sunday night’s closing festivities include a a showing of the “Best Overall” Short Film from Saturday’s Juried Competition and a screening of the film Orecchie, a tragicomedy that begins when a man wakes up with a low ringing sound in his ears and discovers a cryptic note on his fridge, “Your friend Luigi has died. P.S. I took the car.”