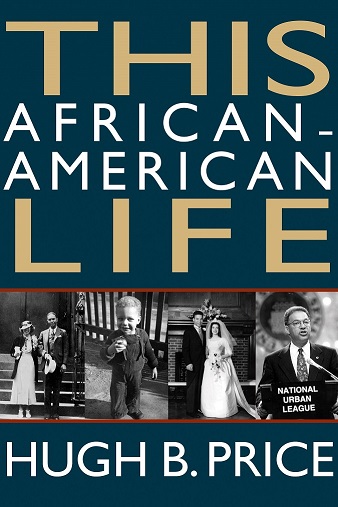 Former President of the Urban League, Hugh B. Price, discusses and signs his new memoir, This African-American Life.

One ancestor fought at Valley Forge.  When another of his ancestors escaped slavery, celebrated abolitionists like Douglass and Garrison rallied to thwart his recapture and return, inspiring the poem, “From Massachusetts to Virginia”, by Whittier.  A third ancestor was a noted inventor who belonged to the Edison Pioneers and perfected the original light bulb by prolonging its initially short life.

Hugh B. Price is a long-time civil rights leader, activist and public intellectual.  As president of the National Urban League from 1994 to 2003, he launched the League’s historic Campaign for African-American Achievement, spearheaded pressure on the federal government to combat police brutality and racial profiling, vigorously defended affirmative action, and helped repair frayed relations between the black and Jewish communities.

Over the course of his unique career, he has been an editorial writer for the New York Times; senior vice president in charge of the division at WNET/Thirteen which produces such acclaimed PBS series as Great Performances, Nature and American Masters; vice president of the Rockefeller Foundation; and visiting professor in the Woodrow Wilson School at Princeton University. He currently serves on the National Commission on Social, Emotional, and Academic Development.

Price is the author of five books.  His articles have been published in the New York Times, Wall Street Journal, Phi Delta Kappan, and Chronicle of Higher Education.  His numerous television appearances range from Meet the Press and The Newshour with Jim Lehrer to Charlie Rose and The O’Reilly Factor.  The recipient of honorary degrees from Amherst College and Yale University, he is a member of the American Philosophical Society and a fellow of the American Academy of Arts and Sciences.